The Resurrection of Civility – Take Back Your Community Association Board 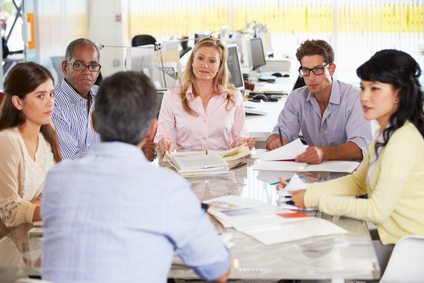 In June, I addressed the Death of Civility – Why Community Association Board Members Serve – in part one of this series. I left you with a dysfunctional collection of community association board members, and the promise of a next installment. Well, here you are – specific, time-tested suggestions for bringing all the directors back into the fold.

1. SET UP THE ACTUAL BOARD TABLE WITH MINDFULNESS.

Most of the time, the table is set up straight across the front of the room, so that the board sits in a line and faces the “audience.” This arrangement creates several impediments to constructive dialogue among the directors and opens the door for abusive and disruptive behavior among directors:

Can we manipulate the room set-up to change the energy and dynamics at the board table?

First Suggestion: Set up the tables in a V-wedge or as a U-Shape. All of the directors can then see each other. And the extreme ends of the tables will actually be located closer to the audience, so the board member who likes to take shots from the corners will be out in front and highly visible to everyone. No more lurking in the shadows.

Second Suggestion: Use individual tent cards showing the director’s name on it. Place the tent cards to separate co-conspirators and to prevent the bully from capturing the seat from which he feels most comfortable. Then change the configuration of directors the next meeting. This prevents a director from going to his habitual place, and falling into his habitual pattern. It also gives each director a chance to sit with different members of the board and offers the opportunity for directors to get to know each other a little better.

The time has come to adopt a Community Association Board of Directors Code of Conduct. This would be a set of rules for individual director’s behavior at each board meeting. What would you cover?

Well, you get the idea, and can probably think of other areas to address, depending on the law in your particular jurisdiction. The Code then is signed by each board member, and then presented to and signed by each new director from that point forward. It would be a good idea to share the Code with any potential candidates prior to the annual election.

NOTE: Even if a director refuses to sign the Code of Conduct, it is a board policy, and that director is obligated to follow it. And, if she won’t sign it, that should be an alert to what you can expect from that director in the year to come.

Stay tuned for the final installment regarding attendee behavior at a board meeting.

Meanwhile, life is a continuing challenge out there. Stay mindful everyone.

Ellen Hirsch de Haan has over 30 years of experience practicing homeowners and community association law. She regularly teaches classes on the subject to further educate homeowners and property managers alike. Ask to join our email list to learn more by contacting marketing@whhlaw.com.

This is excellent information. Tried and true over the years.